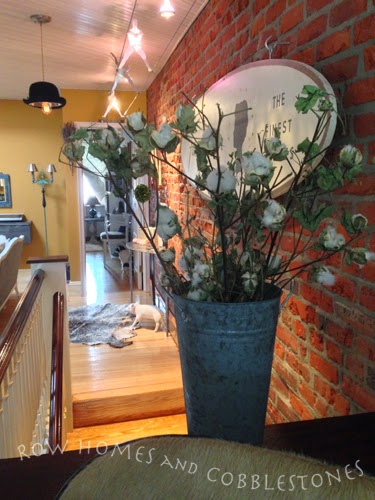 Collected treasures and cherished things, makes our heart's rejoice and sing. You're looking out from our bedroom into the hall and sitting room. 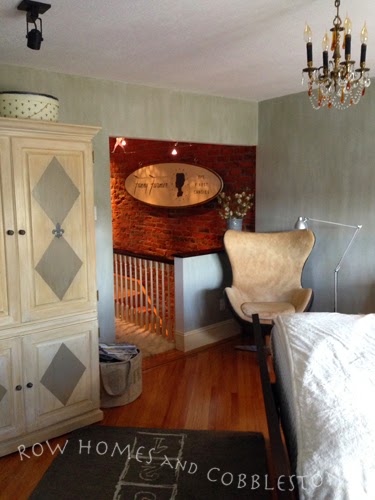 Today's post is photographed inside our bedroom. It's a difficult room to photograph because of the natural lighting, I've tried my best. The armoire was hand painted by me, I have a love of Harlequin's pattern design. The egg chair is from Restoration Hardware with leather back, cowhide front. Our petite chandelier was an eBay find. 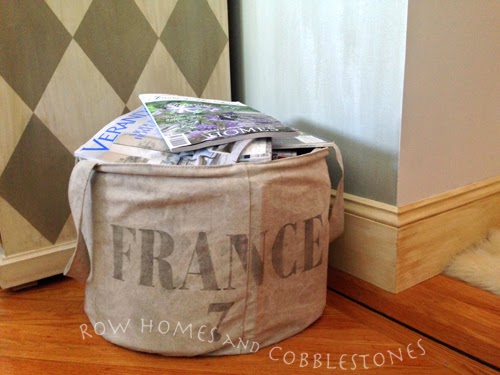 Ok I'm willing to admit it . . . I Vera, am a magazine addict/hoarder! 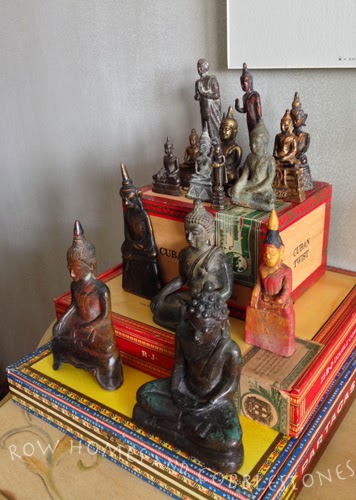 But my concentration of today's post is on the nightstand and wall above it. Last post I teased about an appearance by John Lennon, he does influence my writing in this post. I have many collections, but the most important one to me is my Buddha's. In them I feel peaceful energy and positive Karma released. All our Buddha's with the exception of our amulets have been appraised for insurance. I am sharing my Buddha amulet statues with you in the first part of this post. 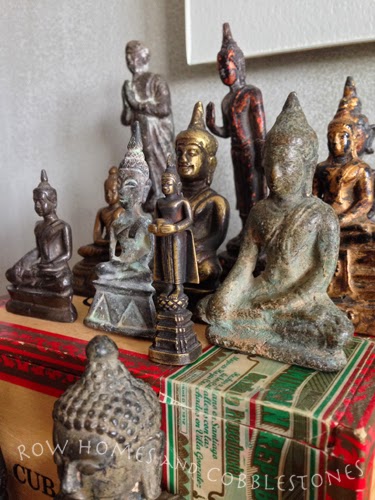 I believe all my Buddha amulet statues are authentically antique and were blessed by Buddhist monks. It is what I was told by the dealer's with every purchase. Some people may refer to them as Talisman, the ones I own traveled with people throughout Asia as a form of protection. Often in their pocket and were left at a Buddhist temple's altar as an offering. Similarly as in the Catholic religion of lighting a votive candle with your prayers. 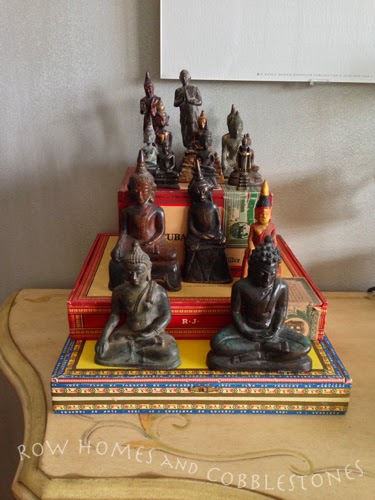 In ancient times people always carried them. Even today the tradition continues. Originally some were made to be buried beneath Buddhist temples and found inside much larger Buddha statues. Pretty much believed to be storage batteries for Buddhist energy. Mine are made from all types of metals, bronze, brass, overlays on lead with gold and one is even wood. That one I acquired Jan. 2014, to me it looks styled in the folk art altar carvings from Laos. My collection of amulets were carried for protection and then left at a temple altar as an offering. All are said to be around a 100 years old+ and one a pre 1800's bears much erosion, a wearing down of face and features. Each has developed an interesting patina and I too carry one with me at all times. 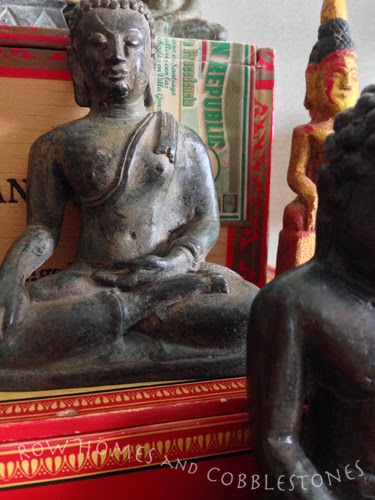 I have displayed them on 3 vintage cigar boxes my brother-in-law Ken gave me. I like the graphic punch they give as they serve as lifts. I think the colors and the box graphics add contrast and interest. Living in a 1,886 square foot row-home doesn't allow extra space for a private room, nor a meditation and alter room. So I have them on my nightstand offering me and my dreams protection. I was instructed to display them above heart level while lying down, these are, but I'm not sure if my nightstand is a Buddhist preference for their display. 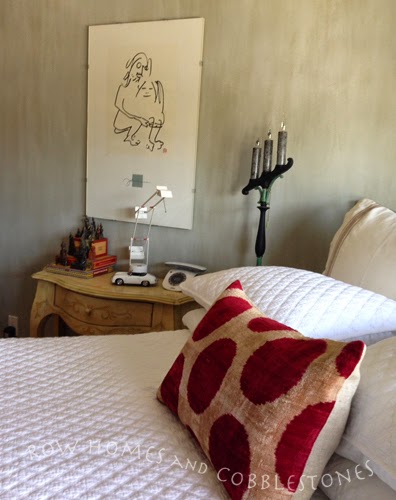 "The Hug"
My favorite Beatle was John Lennon, oh sure Paul had those dreamy eyes, but John was sheer inspirational creative energy to me. Art was Lennon's first love, before playing the guitar during Beatles fame. In 1969 he created a portfolio of four drawings which he entitled "Bag One" illustrating his wedding with Yoko Ono and their honeymoon. Married in Gibraltar on March 20, 1969. Remember their honeymoon's bed in for peace in Amsterdam? I so adored all their white cotton pajama's and wanted a pair.

While on a vacation in Amsterdam we did not complete all our intended site-seeing spots. Their bed in and the Anne Frank house were not visited. Thankfully we plan another trip there, hopefully soon. John and I were fixated on the museums, it was during the 400th anniversary of the paintings by the Dutch masters. We loved the canals and spent everyday enjoying both an afternoon and evening boat ride through the canals. It still amazes me that the Dutch took sea salt water and turned it into fresh for fishing. Talk about creative genius.

"We live in a world where we have to hide to make love, while violence is practiced in broad daylight."
~John Lennon~ 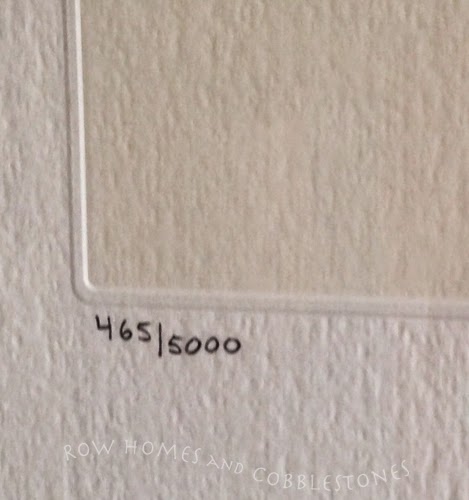 In 1988 Yoko Ono authorized a limited edition release of "Bag One", from Lennon's estate. The Hug is my favorite of the four. This is a Lithograph signed with a red chop stamp in Lennon's design. Intended by him to read "Like a cloud, beautiful sound." A limited edition pencil numbered, ours is 465 of 5000. 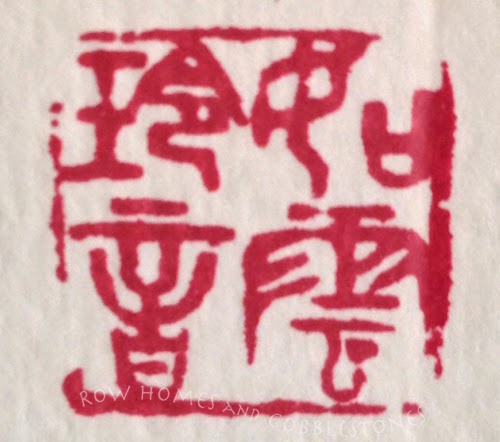 Extreme close up of chop signature -"Like a cloud, beautiful sound"

We purchased it in 1988 when it was first released. It measures 24x36 inches. We have it framed sandwiched between glass, archival, on a wall in our bedroom that never receives direct sunlight. Seriously if our house ever caught fire in one arm my cats would be carried out along with this Lennon print in the other. People say to me all the time, everything you own holds special meaning ... I say yes, very true.

"Creativity is a gift. It doesn't come through if the air is cluttered."
~John Lennon~ 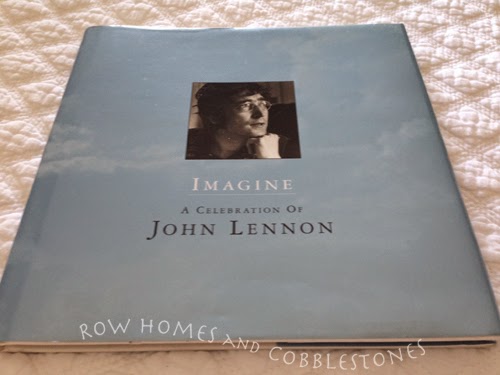 IMAGINE A celebration of John Lennon was published on the 15th anniversary of his death. Published by Penguin Studio with the approval of Yoko Ono. That year at Christmas my brother Kevin and my sister-in-law Gay gifted me the book. I own a lot of books but this one is my favorite. It is small, thin and magical.

Imagine is the song most entwined with John Lennon's memory. The lyrics are mirrored in precious photographs of Lennon's life. There is a hauntingly beautiful feel to the book and it has Mylar sheets with the lyrics words printed on them. No other words appear in the book except the lyrics to Imagine. 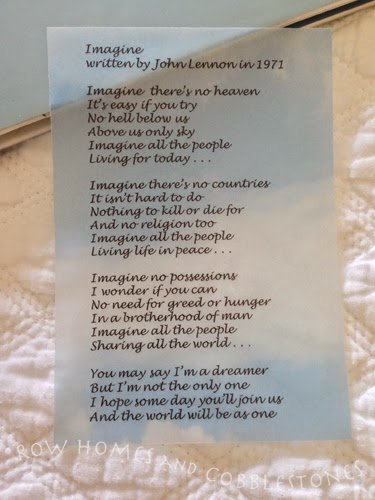 One Christmas while the Iraq war was raging and peace only an illusion we made our holiday cards reflect our feelings. Our card was custom made, simplistic on textured white card-stock with a dove holding an olive branch in it's mouth. A black line drawing with the word "Peace" was letterpress printed on it. John and I printed on blue cloud Mylar the words to John Lennon's Imagine and we enclosed them in everyone's card that year. The envelopes were hand stamped with a peace symbol from the 60's. That Christmas our tree had white whites and only white Doves on it . . . Yes, I am a pacifist. 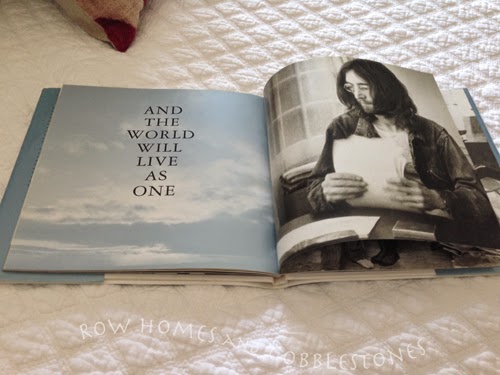 On December 8th, 1980 outside of the Dakota in New York City, while I was in my 20's decade, John Lennon was abruptly taken from Earth. For me, I loss trust and innocence and along with the World loss of a creative genus. Lennon was a political activist and believed in pacifism.

"My role in society, or any artist's or poet's role, is to try and express what we feel. Not to tell people how to feel. Not as a preacher, not as a leader, but as a reflection of us all."
~John Lennon~

As in my established blogging style,  I will always weave my stories into my photo essay and leave you with my poetry to ponder. Today's poetry will give you lots to ponder!

The first blog I followed was Apartment Therapy. Last week they featured an article which contained 9 decorating tips,  I want to share tip No. 9 ...

"Comparing your home to someone else's takes away from authentically creating yours".
~Apartment Therapy~ 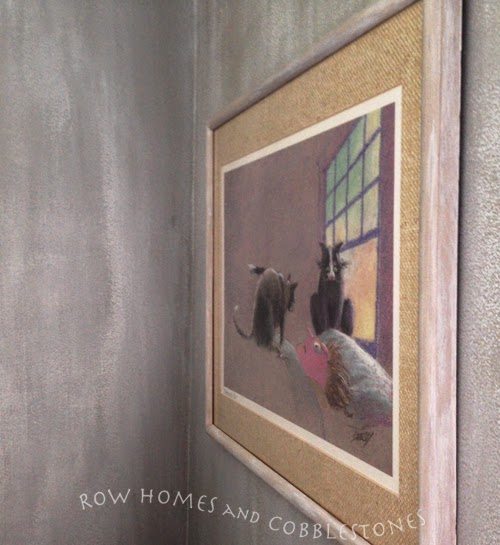 Behind our bed hangs a color pencil drawing titled "Demando Cat". John and I a long time ago  purchased this print as a gift for my father-in-law Orlando. It eventually through the circle of life returned back to us. I white washed the frame and it this is what occurs every morning as our >^..^< boys demand we get up and feed them. We adore this drawing and of course our fur kids.
XX,
Vera
All photos taken by me - Vera

Sometimes we curiously ask but dismiss obscure answers to questions and hesitate to react.
I am often asked what inspires my creativity and while not trying to sound esoteric or abstract...

My answer is simply from the creative energy flowing freely in the heavens above,
I'm able to channel it into my own artistic expression which becomes a labor of love.

A kinetic energy cloud of knowledge and emotions of those who have passed for us to reach,
enabling everyone to know of it's vitality and sustained creative energy is what I dare to teach.

Philosophers and Scientists offer affirmation of universal energy in our existence of reality.
Believing life force energy permeates everything around us in finality isn't just triviality.

For enlightenment in the creative energy pool brings inspiration to you from a far,
And tapping into inventive flickering ideas is as simple as capturing fireflies in a jar.

We all know to be receptive to things you intuitively feel but can not always explain or see.
First step in acceptance is to free your mind of vague misconceptions, do you agree?

Galileo, Michelangelo, Mother Theresa, Thoreau, Pavarotti energies to draw upon to inspire.
Quieting the chatter in my mind to focus in on their brilliance is a state of consciousness I desire.

It is a powerful energy cloud that will never dissipate, vanish nor arouse provocation.
Offering my vision and experience of the creative energy pool is my poetic aspiration.

© Vera
Posted by Row homes and Cobblestones at 4:59 PM 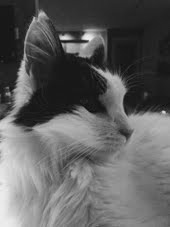